Volunteer with The Enfield Talking Newspaper

Around 35-40 volunteers are involved in producing and distributing our recording each week, working in weekly teams for a few hours at a time. Our aim is to provide an audio recording of the Enfield Independent as quickly as possible, so we set to work on Wednesday afternoons, once the paper has been published, when the editors prepare the copy for broadcast. We record our broadcast on Thursday evenings. We copy and distribute the broadcast on Friday evenings.

We currently have volunteer vacancies. Find out more below. Please get in touch if you are tempted to join our team!

Role: Copy Editors
Current vacancies: Yes
When: Wednesday afternoons/evenings once a month
Where: Home based
Time Commitment: 1-1.5 hours per month

Our Editors are responsible for sourcing copy and preparing it for broadcast. Editors obtain two copies of our local newspaper, the Enfield Independent and one other magazine (such as the EN Magazine, Your Enfield Magazine, Palmers Green & Southgate Life, Edmonton Green Magazine).

Editors are responsible for printing and cutting out articles for reading either from printed copy or from electronic versions of publications that they download and print from the internet. Individual stories are cut out into separate sheets for each reader. Editors highlight any difficult words or names. They prepare a list of events information (often drawn from hyperlocal blogs such as N21.net, Palmers Green Community and Love Your Doorstep). Cuttings are separated into separate bundles comprising; the lead story, notices, events information, sports news, comment and letters and delivered to the Enfield Civic Centre before Thursday evenings for our readers to collect. 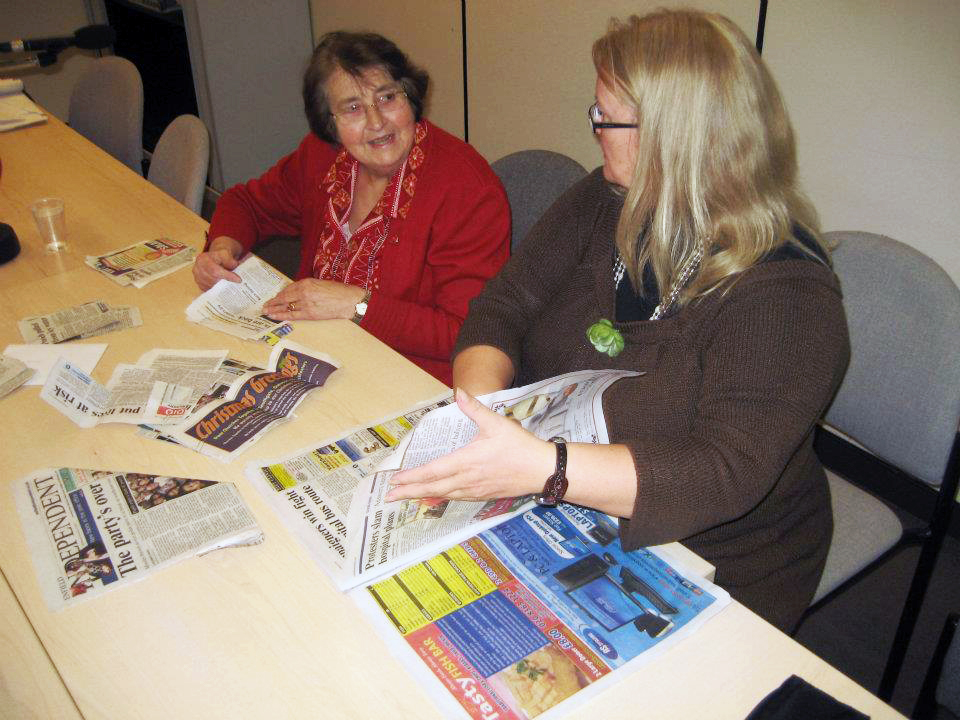 We currently have a vacancy for a 'Standby' Digital Recording Technician and Sound Engineer to look after our recordings during gaps due to holidays or illness and take charge of the recording when there is a fifth week in the month.

Our readers work in weekly teams with four readers per team. We aim for a balance of voice types on each team to provide variety and interest for listeners. Each team has a lead reader who introduces the broadcast. Readers then read cuttings aloud in turn. Recordings are ‘as-live’ meaning there is no rehearsal or re-take. New readers are subject to an ‘audition’ with listeners asked for feedback. No experience is necessary but a clear speaking voice is required. Recordings take between sixty and ninety minutes. Reading is our most popular volunteering role but vacancies do arise from time to time. New readers often join our ‘standby’ list initially.

Our Production Team is responsible for copying and distributing memory sticks to our listeners.
Listeners return their memory sticks to Community House each week in reusable wallets and these are stored in postal sacks until Friday evening. Returned wallets are "checked in" on our listener register. Memory sticks are removed and set aside ready for recording the next edition. Wallets are then "checked out" on our register and filled with memory sticks containing the new recording.
The register allows us to monitor listener behaviour. Some listeners are able to get to a post box every week to return their wallets. Others are house bound and do not receive regular visitors so are not able to return their wallets so frequently. The Administrator monitors the register and when we notice a change in behaviour we alert our Listeners Representative who makes a telephone call to check all is well. This neighbourliness is an important part of what we do.
Administrators make a record of the number of memory sticks received and issued, repair or replace damaged or worn out wallets and prepare new address cards for new listeners as required.
Sometimes listeners or their friends or relatives send back notices with their wallets - the administrator will respond where relevant or pass on messages to the Chairman or relevant person for a response.

We currently have vacancies for Production Team Administrators to cover holiday periods.

It would also be useful to have access to a computer with a printer to print new listener labels (expenses covered) but this is not essential.

Our Production Team is responsible for copying and distributing memory sticks to our listeners. The team comprises Technicians and Administrators.

Our Technicians are responsible for the technical aspect of the operation, although it isn’t too technical and full training is given! They begin by downloading the master recording from Dropbox and preparing a master memory stick for copying. This involves dividing the master recording into tracks using Audacity and adding on third-party content, such as articles from Infosound London, to the end of the broadcast. This work is carried out at home, so Technicians will need access to a computer and an internet connection. The master recording is uploaded to Dropbox on Thursday evenings, so the master memory stick can be produced from then onwards.

After creating the master memory stick, technicians upload a copy of the recording onto Youtube, SoundCloud and Sonata (internet radio) and our website.

The picture below was taken after the Production Team had copied their final tape, in 2015, when we switched to memory sticks! The new machines are much less noisy!